Harley, his mother and siblings were being sold on Craigslist. We were told two men came to see them, one offered to slaughter all on site and the other offered to take one home. Harley was one of the lucky ones to be brought home and kept as a house pig until the family realized he needed more then they could give.

A foster home was found and the love between the foster and Harley was a difficult bond to break. She too wanted more for him and with a broken heart she found Harley his forever home with us.

He is a big boy with beautiful coloured bristles and the longest ivory eyelashes. When Harley runs, it is like that of a deer with carefully placed hoof steps which makes him appear like floating in the air. He makes these baby squeaks , when you give his bristles a scratch on his back, too adorable! 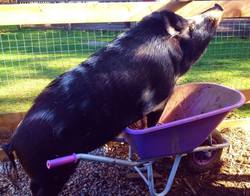